Michigan became the 26th state in the US on January 26, 1837. Michigan is on the border of four of the five great lakes and is divided into the Upper and Lower Peninsulas by the Straits of Mackinac, linking together lakes Huron and and Michigan. They are connected by the Mackinac Bridge, which is one of the world’s longest suspension bridges!

Michigan’s state flag has a dark blue background, featuring an elk and a moose each having one hoof on a blue shield. The shield says “Tuebor” (meaning “I defend) above a picture of a man standing on a peninsula, raising one hand in friendship while his other hand is on a rifle. Above the shield is a bald eagle grasping onto an olive bra

nch and arrows in its talons. A red ribbon above the eagle says E Pluribus Unum (“From one, many”). Below the shield is another motto, “Si Quaeris Peninsulam Amoenam Circumspice” which means “If you seek amenable (pleasant) peninsula, look about you”. The bald eagle symbolizes the United States while the Elk and Moose represent the state of Michigan. This flag was adopted as the state flag of Michigan in 1911. 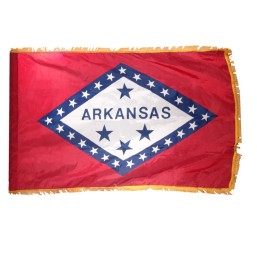 Halfway through the State Flag series and at the 25th state is Arkansas. Although founded by Spanish settlers (most famously Hernando De Soto), Robert LaSalle claimed the land for France in 1682. Henri DeTonti established the first European settlement in Arkansas in 1686 in the lower Mississippi River Valley, in which the settlement was known as Arkansas Post (Poste aux Arkansas in French). Arkansas was later obtained with the Louisiana Purchase through France in 1803.

The state flag of Arkansas is red with a diamond in the center. The diamond is white and outlined with a blue stripe along with twenty-five white stars, each representing the then-twenty five states in the nation. Written inside the white diamond is the word Arkansas and four separate stars, all blue. The three stars below the state’s name symbolize the three countries who once owned the state, Spain, France, and the US. The star above is their membership in the Confederacy. The reason for the diamond shape is because Arkansas is the only US state in which diamonds have been found. (Mount Ida is the Quartz Crystal capital of the world).

How did Arkansas get named? The name Arkansas means “South Wind” but it was also a named used to describe a local tribe, Quapaws. Several people had different pronunciations of the name, ranging from Oo-ka-na-sa to Arkensa. It was Arkansas at the time of its admission into the Union.