Tailgating has become a time-honored tradition in the United States. For decades, sports and music fans across the country have gathered around their trucks, minivans, SUVs and RVs in parking lots outside of stadiums and concert venues. College football fans have created cities out of both empty pastures and asphalt, with makeshift barbeques and pick-up Frisbee games the order of the day. 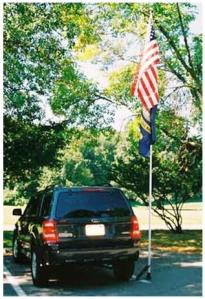 The term ‘tailgating’ arose from the term for a truck bed’s door, or tailgate, which served as a meeting point and surface area for food and beverages. Nowadays these ‘gatherings’ can include hundreds of thousands of people, producing a veritable sea of vehicles that has become increasingly difficult to navigate. (Try to meet up with friends at a Penn State game in Happy Valley and you’ll be grateful for the 20th century invention of the cell phone.) Yet even the most clearly articulated directions yield confusion, as “third RV on the left, 12 aisles down” can become convoluted. Because of this, avid fans have discovered a new way to differentiate themselves from the masses through the use of tailgating flags.

Brightly colored and typically adorned with a team logo, tailgating flags appear in a number of places. They can be placed on car windows, hung as banners from RV awnings—or, for the extremely ardent fan—flown on tailgating flagpole sets. Not only do these serve as a high-flying beacon for family and friends, but they’re also as a symbol of personal pride and commitment to a team. Telescoping pole sets tower over surrounding trucks and SUVs at 16 feet high. Using these poles, dedicated fans can fly two flags at once to showcase a university and professional team, state flag or armed forces flag, for example.

All things considered, no better way exists to show that you’re the biggest fan than to display it proudly with a several tailgating flags!