Today American taxpayers in more than 300 locations in all 50 states will hold rallies – dubbed “tea parties” – to protest higher taxes and out-of-control government spending. And the banner uniting all of these concerned Americans? Well, the Gadsden Flag of course!

The Gadsden Flag has traditionally been seen as a symbol of American patriotism.  The traditional imagery associated with the Gadsden Flag was first seen in the year 1775.  The Second Continental Congress had just authorized the first

ever mission for the new American Navy, and among the first marines to enlist during this time were men from Philadephia.  These marines are best known for carrying their symbolic yellow drums depicting a coiled rattlesnake with 13 rattles, with “Don’t Tread On Me” being their now famous motto.

It is commonly believed that the flag itself had been inspired by these symbolic drum-carrying Marines from Philadelphia, with Continental Colonel Christopher Gadsden of South Carolina as its creator.  At the second Continental Congress, Gadsden submitted his flag to then commander in chief of the Navy Esek Hopkins, and the rest was history!

The Gadsden Flag is still flown in Charleston, South Carolina – the city where Chrisopher Gadsden first presented the flag.  It was flown in the wake of the September 11th attacks, most notably by US Customs officials and harbor patrol boats in US ports.  The Gadsden Flag is also commonly flown by many Boy Scouts troops, and has even been featured in a few movies and television shows, most notably in the 2000 film The Patriot.  But now, the Gadsden Flag is prepared to take on its new role — as the banner of the Tax Day Tea Party rallies popping up all over America.

According to The Wall Street Journal,

“The protests began with bloggers in Seattle, Wash., who organized a demonstration on Feb. 16. As word of this spread, rallies in Denver and Mesa, Ariz., were quickly organized for the next day. Then came CNBC talker Rick Santelli’s Feb. 19 “rant heard round the world” in which he called for a “Chicago tea party” on July Fourth. The tea-party moniker stuck, but angry taxpayers weren’t willing to wait until July. Soon, tea-party protests were appearing in one city after another, drawing at first hundreds, and then thousands, to marches in cities from Orlando to Kansas City to Cincinnati.” 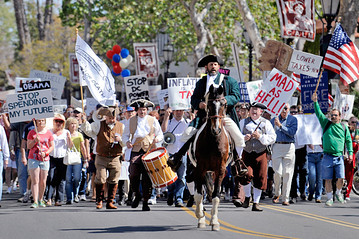 There are currently between 300 and 500 protests planned to occur in various cities around the world today, and there is sure to be a tea party near you.  For more information or for tea party locations, be sure to check out www.taxdayteaparty.com

If you’re planning on attending one of the many Tax Day Tea Parties across the country, or if you already have, feel free to drop off a comment and let us know how it went!

View all posts by Tommy McLaughlin

8 thoughts on “The Gadsden Flag: Symbol of Freedom”