The official flag of Scotland, also called the Saltire, is believed to be one of the oldest national flags in the world, dating back to the 12th century. It is composed of a white cross on a vivid blue field. The word “saltire”, is in fact, a reference to an “X” shaped Christian cross, in this case, specifically to the one on which St. Andrew is said to have been crucified by the Romans. 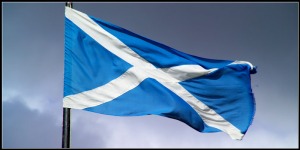 St. Andrew is believed by Christians to be one of the original apostles and the brother of Simon Peter. He is also the patron saint of Scotland. Hence the flag of Scotland is also referred to as the Cross of St. Andrew.

St. Andrew is connected to Scotland through legends surrounding the travels of bits and pieces of his remains, also known as “relics”. Two different stories forge a link between St. Andrew and Scotland. One says that the relics were carried to Scotland by Acca, the Bishop of Hexham, in the year 733.

In the other, more colorful story, about 300 years after his crucifixion, St. Andrew’s remains were moved to Constantinople by Constantine the Great. Sometime later, a monk, known as St. Rule (or St. Regulus) dreamed that he should remove the remains and take them to the ends of the earth for safekeeping. He did so by pillaging the body, taking a kneecap, a tooth, an arm bone, a tooth and some fingers. It is believed that he shipwrecked and came ashore on the east coast of Scotland, and so it is that the relics became associated with Scotland.

In another story, the Saltire was conceived in the year 832 when battling Scots at Athelstaneford saw what they believed to be a favorable sign—clouds collected in the X-shape of the cross that St. Andrew had been crucified on, against the blue sky. They won the battle, and flew the flag of St. Andrew forever afterward.

View all posts by Carol Frome

2 thoughts on “History of the Flag of Scotland”