As Memorial Day nears, Americans all across the country are encouraged to remember America’s fallen heroes, both within our borders and abroad. This past week, we join many other Americans in the mourning of Newt Heisley – the original designer of the POW/MIA Flag, who passed away on May 14th, 2009. Mr. Heisley’s POW/MIA flag is arguably the 2nd most popular flag in all of America behind none other than the Stars and Stripes herself. 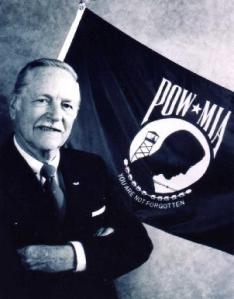 In his early years, Newt Heisley was a pilot in the South Pacific Theater during World War II. During the Vietnam War, however, Mr. Heisley became a professional art director at Annin and Company, the country’s largest flag manufacturer. In 1971 he was asked to create a flag for the National League of Families of American Prisoners and Missing in Southeast Asia. Heisley, as he himself was a veteran of the South Pacific Theater of World War II, had a personal concern for the many who served in the Vietnam War.

The design for Newt Heisley’s POW/MIA flag shows a silhouette of a soldier’s head in the foreground, with a watchtower and a guard surrounded by an intimidating barbed wire fence behind. Mr. Heisley’s design was reportedly inspired by his own son Jeffery, who at the time had been training with the United States Marine Corps to fight in Vietnam.

Jeffery Heisley never even made it out of training; he immediately became very ill during his training at the Marine Corps base in Quantico, Virginia. Jeffery was reportedly diagnosed with hepatitis – a disease that ravaged his body, completely emaciating his face and body structure.

When Jeffery returned home, medically discharged and unable to continue in the United States Marine Corps, his father Newt looked on in horror at what had once been a strong and able young man. Then, as Newt Heisley looked closer at his son’s haggard features, he began to imagine what life must be like for those prisoners being held behind barbed wire fences on foreign shores. Slowly, he began to sketch the profile of his son, working in pencil to create the now familiar black and white silhouette of the POW/MIA flag.

Perhaps the most symbolic part of the entire POW/MIA flag — more important than just the sketch of a distraught and malnourished prisoner, and more meaningful than the intimidation of the barbed wire background — are the words emblazoned in bold white letters across the bottom of the flag.

“You Are Not Forgotten“, the flag boldly exclaims – and it is this statement, profound in its simplicity, that epitomizes the very heart and soul of the American people.  This short 4 word sentence characterizes the American people’s unending love and appreciation for all those who have chosen to sacrifice their lives so that we may live – and live well at that – in the best country this world has ever known.

View all posts by Tommy McLaughlin