The Bear Flag, California’s state flag, was adopted by the California State Legislature in 1911. It is white with a red stripe along the bottom and a red star in its upper left-hand corner. There’s also a California grizzly bear – a species now extinct – at the flag’s center. The bear depicted on the flag is modeled after the last wild Californian grizzly bear to be held in captivity. Named Monarch, the bear was held at Woodwards Gardens in San Francisco. After its death, it was preserved at the Academy of Sciences at Golden Gate Park. 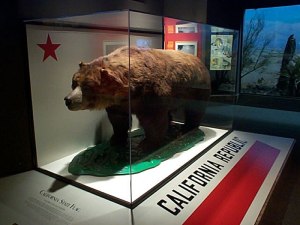 The original Bear Flag was flown during the 1846 Bear Flag Revolt. It was designed by a man named William L. Todd – nephew of Abraham Lincoln’s wife, Mary Todd – using blackberry juice. Todd placed the star on the flag in recognition of the California Lone Star Flag, while the bear was meant to signify strength and unyielding resistance. The flag was raised for the first time in Sonoma, California. Supposedly, when it was hoisted, native Californians were heard saying “Coche,” the common name for a pig. Apparently, Todd had not drawn a very convincing Californian grizzly bear.