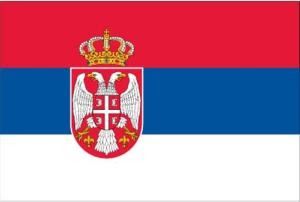 The flag of Serbia was adopted on August 16, 2004. It is a rectangular flag with three horizontal stripes of equal width: the top stripe is red, the middle stripe is dark blue, and the bottom stripe is white. Centered vertically, towards the left side of the flag is the lesser coat of arms of Serbia, which features a red background with a white double-headed eagle, Serbian cross between four silver fire steels, two fleurs-de-lys, and a crown at the top.  The colors blue, red, and white, represent the pan-Slavic colors and are featured in many countries’ flags near Serbia.

The origins of the Serbian flag date to 1281.  This flag was flown under the rule of Stephen Vladislav I of Serbia and consisted of two horizontal stripes: the top stripe was red and the bottom was blue. A map from 1339 depicts of a different flag, however. This flag, flown under the rule of Stephen Uros IV Dusan of Serbia, features a red double-headed eagle on a golden background, similar to the Serbian coat of arms.

In the early nineteenth century, many flags were used in Serbia, some using the double-headed eagle in various colors and others using the pan-Slavic colors.  In 1835, however, the Sretenje Constitution standardized the Serbian flag, mandating that the official flag would contain three horizontal stripes of red, blue, and white.  Critics of the flag and the constitution thought the flag was too similar to Russia’s flag and the flag of the French Revolution, but the tricolor base remained.

The red, white, and blue stripes have been the foundation of the flag, but several variations have been used during the last two centuries.  From 1892 until 1918, during the Kingdom of Serbia, the royal coat of arms was included in the center of the flag.  After World War II, during the Socialist Republic of Serbia, the flag contained a red star in the center.  Following the fall of the communist regime, Serbia’s flag was a plain tricolor until 2004, when the lesser coat of arms was included.

View all posts by emilyrex