Welcome to the first post in my series of Fifty State Flags. I am very excited to be given the opportunity to present this to all of you. Please bear with me for I am a little rusty on my US History but once I get fired up, I am going to rock this! 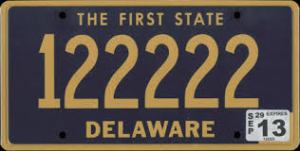 The very first state in the United States, Delaware, is a small but important state in our history. The license plates even boast “The First State.” Delaware is one of the original thirteen colonies but the first to take the leap and become a state.

While Delaware became a state on December 7, 1787, the flag 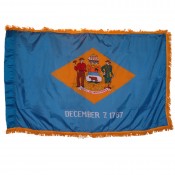 wasn’t adopted until July 24, 1913. According to the state website delaware.gov, the flag is blue with a buff-colored diamond and the Delaware coat of arms is placed in the middle. The 1787 date is underneath the diamond to commemorate Delaware becoming the first state to ratify the federal constitution.

The state was named after Virginia’s first governor Thomas West, also known as Lord De La Warr. Delaware is a good state to experience the four true seasons, which includes my dream seasons – the changing of the leaves in the fall and snowy winters (I’m from California and we get nothing but sun, sun, one day of rain, and more sun all year long). While Dover is the state capital, Wilmington is the most populous city in Delaware with 36,047 vs. 70,851 (2010 US Census).

I am glad to say that I traveled to Delaware myself in the summer of 2011. It is a beautiful state but unfortunately I did not see much since I was on the way to New York with my fiance and his family.

Fun Facts: Delaware ranks first in the nation for avg. internet connection speed and third among the states for knowledge jobs (IT). The estimated 2014 population is 935,000 and there were 508,000 acres of Delaware farmland in 2012. 65% of Fortune 500 companies are incorporated in DE, and tourism currently generates $441m in tax revenue. (delaware.gov)