From September 8 through September 12, over 3,000 flags will wave in New York City as a tribute to those who lost their lives in the terrorist attacks of September 11, 2001. The flags are located in Manhattan’s Battery Park, just three blocks from the World Trade Center Memorial Museum. The memorial is free and open to the public.

The theme of the memorial is “One Life: One Flag,” and the memorial’s designers encourage visitors to reflect upon the enormous loss of human life that occurred on September 11, 2011.

The memorial contains 2,976 Flags of Honor and Flags of Heroes, all American flags representing someone who died in the attacks. The memorial also includes 96 international flags, one flag for each country who lost a citizen on September 11.

Annin Flagmakers have manufactured all the flags for this event. Annin Flagmakers are the oldest and largest makers of flags in the United States. Two brothers, Benjamin and Edward Annin founded the company in 1847 on Fulton Street in New York City. Aside from being the premier maker of flags in the United States, remaining family owned for over 150 years, and employing over 500 Americans, Annin’s New York City roots make them a particularly appropriate sponsor for the “One Life: One Flag” memorial.

Annin Flagmakers, the Healing Field Foundation, and the Flag of Honor Project collaborated to create the “One Life: One Flag” field.

Co-sponsors of the “One Life: One Flag” memorial include:

“One Life: One Flag” volunteer organizations include:
Fort Dix

We remember those who perished and the families left behind.

We remember the first responders who bravely raced to the rescue of others.

We remember those who courageously fight the wars on terrorism and those who gave their lives.

Our lives changed forever on the morning of September 11, 2011, when terrorist attacks devastated New York City’s Twin Towers, the Pentagon in Washington DC, and flight 93 in Shanksville, Pennsylvania. Since September 11, 2011, countless troops have died in Iraq, Afghanistan, and other war zones around the world.

Each year, on September 11, we honor the victims of the September 11 attacks and those troops who have sacrificed their lives for our safety. Since September 11, Americans have become increasingly patriotic and Online Stores has supported Americans in the military by donating flags, flagpoles, and pins, among other items.

This year will mark the tenth anniversary of the September 11 attacks. Cities around the country are planning memorial events to honor the victims of the attacks and American troops in combat. Online Stores has a variety of beautiful September 11 memorial flags to help you make the day more meaningful.

The USA 9/11 flag is designed based upon the United States flag. Instead of the traditional blue, fifty-star Union field, however, the USA 9/11 flag features an embroidered image of the New York City Skyline with the Twin Towers, white stars, and the date, September 11, 2011. The flag is 3’x5’ with sewn stripes and durable brass grommets.

The 9/11 Always Remember flag is a beautiful way to honor the victims of the September 11 attacks. The nylon flag features red and white stripes at the top and bottom, a blue image of the Statue of Liberty, and the following poem:

Remember the heroes,
born at ground zero.
Remember the price,
so many still pay.
Move on, face forward,
but remember the day.

This flag is available in the large 3’x5’ size and a vertically oriented garden size.

The 9/11 Remembrance flag features bold images of the New York City and Twin Towers skyline, red and white stripes disappearing into the horizon, and blue stars in the background. The words “Always remember 9/11” appear in the foreground of the flag, with the “11” designed to look like the Twin Towers. This flag is also available in 3’x5’ or garden size. 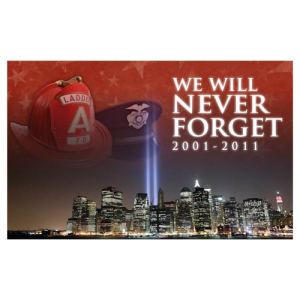 The 9/11 We Will Never Forget flag is specifically designed to honor the 10-year anniversary of the September 11 attacks. The nylon flag features a photograph of the New York City skyline in the foreground and images of a police hat and firefighter’s hat in the upper left corner. The text “We Will Never Forget 2001-2011” appears in the upper right corner in bold white letters. This flag is made from top quality fabrics and can be used inside or outdoors.

Since the horrific attacks of September 11, 2001, the Gadsden flag has been flown throughout the United States by a great number of people. 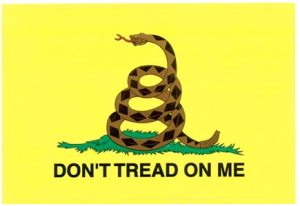 Customs officials at US ports as well as military personnel in every part of the country hoist the Gadsden flag on a daily basis. In fact, it’s now flown on all active naval ships, and the snake from the flag’s imagery now appears on the US Army Drill Sergeant Identification Badge.

US soccer fans have also begun using the Gadsden flag to support the nation’s team. Nike even uses the image of a snake wrapped around a soccer ball for its patriotic “Don’t Tread on Me” campaign, which supports the US men’s national team.

The Gadsden flag is also flown for historical reasons in places like Charleston, South Carolina, where the flag’s designer, Christopher Gadsden, first presented the flag.

Band’s such as Metallica, who put the Gadsden flag’s snake of the cover of their “Black Album”, and 311 have used the flag as inspiration. The Gadsden flag can also be seen in the film, “The Patriot”.

Most recently, the Gadsden flag has been used during the 2009 Tea Party protests.