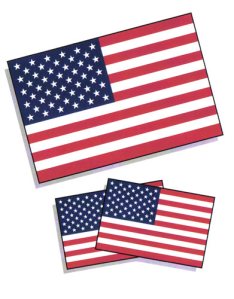 Temporary tattoos are a great and fun way to show your pride without the cost and permanence of getting the real thing!  The U.S. Flag Store has a great selection of temporary tattoos that are non-toxic, safe, and fun to wear.  These tattoos are easy to apply, last for several days—even with showering and swimming—and are easily removed.  Most tattoo packages include 1 large version and two smaller versions of the design.

If you have a loved one serving in the armed forces, the U.S. Flag Store offers a great selection of military temporary tattoos that you can easily apply to support your soldier. The U.S. Flag Store sells Army, Marine, Navy Seals, Coast Guard, Air Force, National Guard and POW MIA temporary tattoos.  On the Flag Store website, you’ll find that the U.S. Army and Air Force patches have two different designs, one with the official seal and one with a simple logo.

The skull and crossbones icon might be the first image that comes to mind when you think about traditional tattoos, and the U.S. Flag Store will not disappoint: check out the Jolly Roger Flag Temporary Tattoo.  With a black background, a grinning skill, and detailed crossbones, this tattoo is the perfect way to show your inner pirate!

View all posts by emilyrex