With the Olympics coming up, there are two very important flags you will see for two weeks: The flags from Greece and Brazil. This is because Greece is where the Olympic movement was born 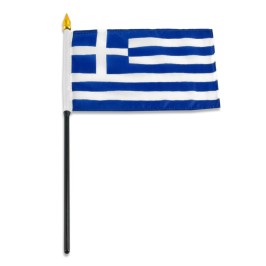 and Brazil is where the 2016 edition of the Olympics are held.

The current version of the Greek flag has nine horizontal stripes, blue and white. On the left hand corner is a blue square and a white cross. This flag was adopted on December 22, 1978. Earlier versions were adopted by the First National Assembly of Epidaurus on January 13, 1822. The nine stripes are believed to represent the symbols in the Greek battle cry, “Ελευθερία ή Θάνατος” (Eleutheria H Thanatos), which translates to “Freedom or Death”, which was said during the Hellenic Revolution against the Ottoman Empire. This flag is referred to as the “Κυανόλευκη” (Kyanólefki) or “blue-white” in Greece. The white symbolizes clouds in the sky, waves in the sea, and perpetual progress.

The most recent Olympics held in Greece was in 2004 in Athens, the same city where the very first Olympics were held in 1896.

Brazil adopted its flag on November 19, 1889 but was updated on May 11, 1992. Brazil’s flag is green with a yellow rhombus with a dark blue circle in the middle with 27 stars (originally 21 stars) 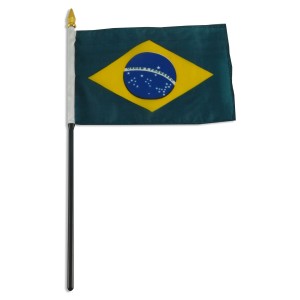 and a white band, reading “Ordem e Progresso”, meaning Order and Progress, the national motto in green letters. The stars in the blue circle symbolize a starry sky but the stars also represent the country’s federated units, every star a single state, including the federal state.

The Brazilian flag was designed by Raimundo Texeira Mendes along with Miguel Lemos, Manuel Pereira Reis, and Décio Villares at the request of the then provisional president, Marshal Deodoro da Fonseca. This was after Brazil had become a republic after being a constitutional monarchy.

Fact: The 2016 Olympics is the first to be held in South America.

Soccer: Brazil has won the most World Cups in soccer, with five wins. Brazil has many superstars including Pelé, who helped in the bid to win Brazil the right to host the Olympics.ac